Register to vote or check your voter registration

Each year, an estimated 30+ million Americans move. Whether you have moved across the country or down the street, be sure to update your voter registration TODAY!

If your name/signature have changed since you registered to vote you will also need to update your registration.

Confirm your voter registration or register to vote at the Illinois State Board of Elections website.

Sign up via Indivisible Illinois TurboVote, Ballot Z or Commit to Vote today and we will send you important updates and reminders so you don’t forget.

Get Involved: Learn how to register others with ILVOTE.

Make a plan to vote

Ensuring your right to vote can take a bit of work. It only takes a few minutes and will ensure that your vote counts.

The safest way to vote in Illinois is Vote By Mail. Receive your ballot in the mail then take your time to review it and research the candidates. When you are ready, fill it out and return it. If you cannot return it yourself, you can sign the envelope authorizing a designated person to return it for you.

Mail in ballots can be returned postage free to a secure designated Ballot Drop Box or your local election office. You may also use proper postage and return it early via USPS.

Even those who intend to vote at the polls should consider requesting a mail-in ballot. The mail-in ballot can be exchanged for an in-person ballot if all goes well, but it serves as a backup plan in case problems arise.

Mail in ballot applications for the 2022 primary can be requested now.

— NEW IN 2022 — Permanent Vote By Mail
A recent Illinois law change allows voters to request permanent mail in ballots, that will automatically be delivered every election. Many cities/counties have made forms available to sign up for permanent vote by mail for the primary. The rest will have the forms available starting 90 days prior to the general election. As long as you reside within the same city/county and properly report your change of address then the permanent mail in ballot should follow you. If you move to another city/county then you will need to re-apply for permanent vote by mail.

Get Involved: Join our Vote By Mail Taskforce.

Option 2: Early voting
Early voting begins in some jurisdictions on May 19, 2022.

Early voting is significantly less risky than Election Day voting, but you may still have to stand in line or come back another day. Expect long lines.

Voters who need assistance should call ahead and arrange for curbside voting, etc.

Need help finding your county of residence? Check out the Illinois State Board of Elections website.

Offices on the ballot

On February 12, 2021, the U.S. Census Bureau announced that it would deliver redistricting data to the states by September 30, 2021, requiring states to postpone their redistricting efforts. As a result, the Illinois primaries were pushed back from March to June.

Redistricting also means that some of your elected officials may have changed. (See * above)

Find your representatives: By Address | By Map

Discover what is on your ballot: Ballotpedia, BallotReady

I was honored to be one of 36 State Campaign Organizers hired around the Nation by The Repairers of the Breach. Their goal was to mobilize and organize Illinois and other States to get folks out to the Low Wage Workers and Moral March on Washington DC on June 18th. I was honored to work with Illinois Poor People’s Campaign and some fantastic organizers and activists in Illinois and the surrounding states. With the help of friends, allies, and organizers, we signed up 45 people from Southern Illinois! Indivisible Metro East sent some members to the March, Illinois showed up and showed out! Making so many new connections with many different organizers and activists were terrific. We worked hard together and built a strong camaraderie to help organize and mobilize our people to the polls this November!

-Forward Together, Not One Step Back.

Jessica Motsinger is the founder and coordinator of Indivisible Metro East, Co-coordinator for the Indivisible Illinois Connecting for Action Statewide Newsletter and a Co-coordinator with Indivisible Rural Illinois. She is also a member of Common Defense, the largest grassroots membership organization of progressive veterans standing up for communities against the rising tide of racism, hate, and violence.

All photos below courtesy Jessica Motsinger. The overturning of Roe vs Wade despite the leak of the draft opinion was a stunning occurrence with the reverberations still being felt today.  How did this happen?  We know that it was decades in the making. The creation of the Federalist Society and massive amounts of investments are just part of the story.  The change in our judicial system toward a more conservative slant appears prevalent at all levels from appellate to circuit to the highest court in the land.  Where do we go from here? How do we start? The VBM Taskforce is proud to host a presentation by Courts Matter IL to give us a deep dive into our judiciary system.  In order to return power to the people, we must understand how the fundamental right to vote is tied to our Courts.  We welcome you to join us to increase our understanding and harness that power to fight for our voting rights, reproductive freedom and gun violence prevention.

Photos: Illinois joined others across the Nation for the Poor People’s Campaign in Washington D.C. Marching from the Federal Triangle to Pennsylvania and Third Avenues where thousands gathered for the rally. Photos above: Candace Davis Join IISJA and NWSOFA at noon CDT on Sat., June 25th as we partner with Field Team 6, Indivisible Milwaukee and Michigan Democrats to promote massive voter registration in IL, WI and MI with a focus on registering LGBTQ+ voters. Field Team 6 identifies unregistered voters, likely Democrats, especially those who identify as LGBTQ+ or are strong allies. When we reach out and help LGBTQ+ voters register and vote, they can shift the balance in their state to make sure every LGBTQ+ person can live openly and freely.

We will not give up until ALL Americans have access to the ballot box. Massive voter registration needs to happen before Midterm elections. Working together – we will get the job done. JOIN THE VBM TASKFORCE AND WISDEMS ON THURSDAYS AT 5:30PM CDT FOR WEEKLY PHONEBANKS TO THE SWING STATE OF WISCONSIN!

Wisconsin is one of only a few “swing states” in the country where elections always come down to a handful of votes. This year may be no different with crucial elections for U.S. Senate and Governor and other important races up and down the ballot. As the Midterms approach and in light of Republican efforts in Washington and Wisconsin to strip away fundamental rights and freedoms and to tamper with the election process itself, it is crucial that we get as many Democrat-leaning Wisconsinites out to vote as possible.

In a recent election, over 90% of Wisconsin voters who requested mail-in ballots actually voted! And so, we are calling into Wisconsin to reach out to infrequent voters (who we believe lean Democratic) to help them request absentee ballots for the rest of the year.

Please join us for this important work! The phone bank will be from 6:00-8:00pm Central Time, with training for newer volunteers or anyone who needs a refresher at 5:30pm. Even if you cannot make the entire session, please join us for whatever time you have!

Find out more and signup:  https://act.indivisible.org/event/local-actions/166503 Win Our Future with Anat Shenker-Osorio
Join us on June 22 for Words to Win Our Future, when Anat Shenker-Osorio teaches us how to deliver messages that inspire people to vote for our hopeful  vision for the future, expose the opposition’s unrelenting dog whistles, and defuse their attacks on good, effective government. The more we learn how to message, the stronger progressives & liberals in Michigan and around the nation will be. This virtual event is free and open to the public.
Date:  June 22 from 5:00 – 6:30pm CT / 6:00 – 7:30 pm ET
Facebook event link: https://fb.me/e/38nDGWLVr
Zoom registration link: https://tinyurl.com/ASO-MI2022
Event Hashtags:  #WeMakeMichigan #WeMakeTheFuture
READ MORE
By Leni
In Elections, Indivisible IL9
Posted May 27, 2022

Indivisible IL9 hosts Hoan Huynh discussing how we can build back better on the Northside of Chicago and statewide.

Since 2017, Indivisibles across the nation have turned out to resist fascism and protect our democracy. We have done it before and we will do it again. Grassroots are on the forefront of this fight to expand and engage everyday people to vote for their values. Join us!

READ MORE
By Leni
In Elections, Indivisible IL9
Posted May 20, 2022 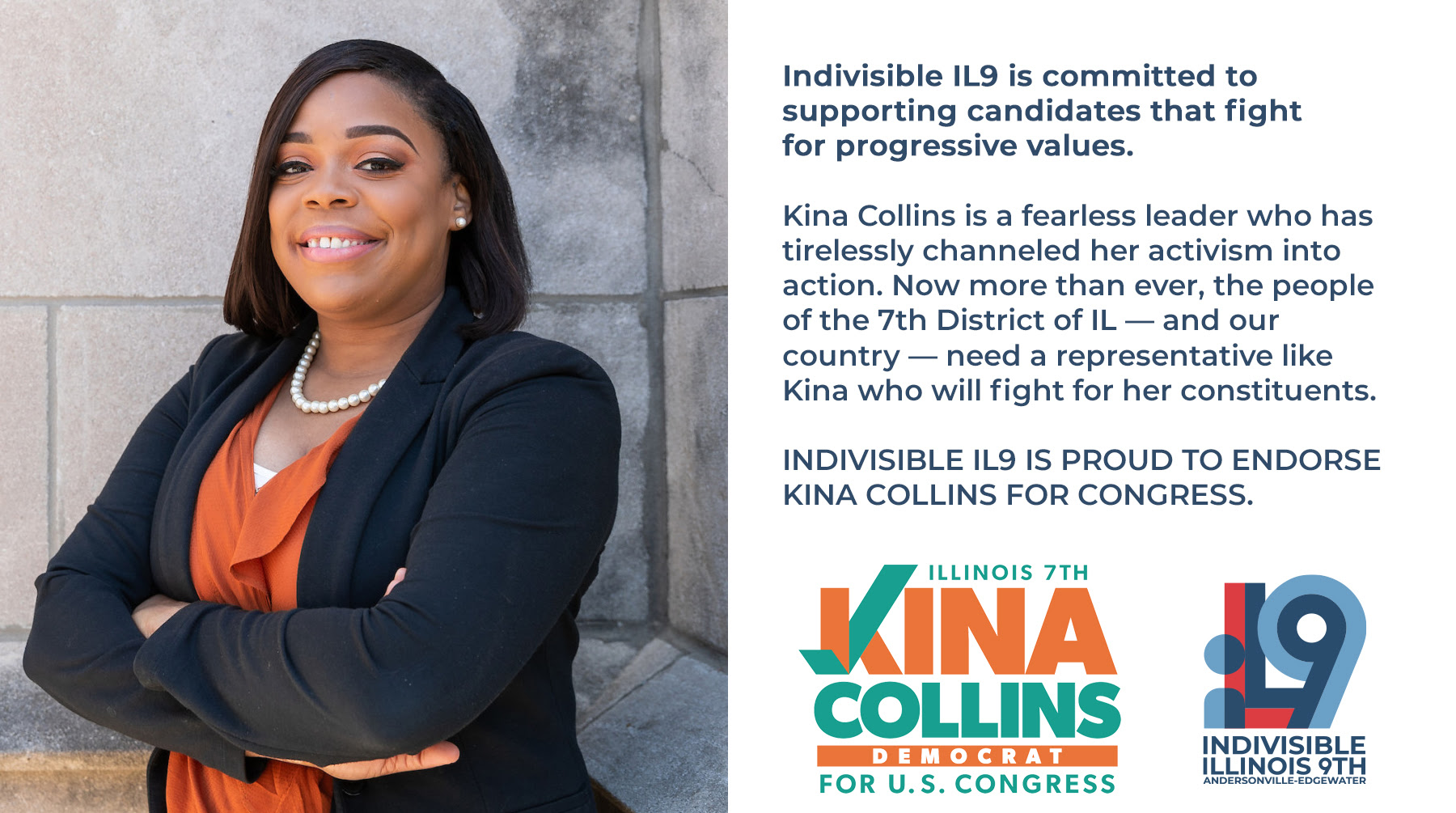 Early voting starts May 19 and election day is on June 28 in Illinois!

Join ILVOTE to prepare for the Midterms and get people out to vote.

We will discuss issues that are primary concerns of voters such as abortion justice, environmental justice, gun violence prevention, and workers’ rights/labor unions. Submit a question now: https://bit.ly/question-june1