As we start the year and embark on winning back the presidency, the Senate and keeping the House we must in the name of election security also address and fight disinformation campaigns that are perpetuated against democratic candidates and those focused on suppressing the vote.

When the Election Security Strategic Team (ESST) attended a hearing conducted by the U.S. House Department of Homeland Security, the testimony of both Steven Sandvoss, Executive Director of the Illinois State Board of Elections (ISBE) and Matthew Masterson, Senior Cybersecurity Advisor of the Department of Homeland Security (DHS) relayed that they were concerned about not only the security of voting systems but also the proliferation of disinformation as an attempt to keep people away from the polls.

According to Mr. Masterson, DHS will be rolling out an anti-disinformation campaign prior to the 2020 elections. While we await the launch of that campaign, the Democratic National Committee (DNC) recently produced a document worth your time. If each of us as citizen activists take ownership for promoting and abiding by the recommendations in this document, we will be heading in the right direction.  Document found here: https://democrats.org/who-we-are/what-we-do/disinfo/general-public/

Thanks to Scott Cross for calling the DNC Combating Online Disinformation document to our attention.

The document is comprehensive and thorough. I will concentrate on the section entitled, DNC Recommendations for Combating Online Disinformation – General Public.

Here are the key recommendations:

Back to the DNC document which references the Senate Intelligence Committee report found below: https://www.intelligence.senate.gov/sites/default/files/documents/Report_Volume2.pdf.

As stated in that report, the Internet Research Agency (IRA) is an entity headquartered in St. Petersburg, Russia, which since at least 2013 has undertaken a variety of Russian active measures campaigns at the behest of the Kremlin.

It is my opinion that in order to combat the problem we must be fully aware of the measures that are being undertaken.

I highlight key findings below in the section, IRA Operations Explicitly Targeting the 2016 U.S. Election:

In addition to denigrating Hillary Clinton, voter suppression among left-leaning audiences appears to have been another political goal of the IRA’s influence operatives. Young Mie Kim, a digital advertisement research expert from the University of Wisconsin, has closely analyzed the IRA’s Facebook advertisements. On the basis of Kim’s analysis, three types of voter suppression campaigns on Facebook and Instagram emerge, including:

Kim found no evidence of a comparable voter suppression effort that targeted U.S. voters on the ideological right (page 35)

Side point from me about point (c) “likely Clinton voters” above.  Jason Johnson in The Root reminds us that 53% of white women pushed Trump over the top in 2016.  Something that as a white woman myself and a Hillary Clinton supporter that I will never understand.  Perhaps some of the disinformation campaigns worked on them too.

I found these points from the Senate Intelligence report also worth calling to your attention:

In addition, the IRA “had a strategic goal to sow discord in the U.S. political system,” which included- but was not limited to-targeting the 2016 U.S. presidential election.156  John Kelly found that “[i]t’s a far more sophisticated  attack than just caring about an election.  And it’s not just one election they care about.  They care about the electoral system.”157

Darren Linvill echoed this point, concluding “[I]n general, there’s been too much focus on Russian interference in the election.  It’s much more than that.  It’s interference in our society, in our culture, in our political conversation.”158 (page 37 – 38)

No single group of Americans was targeted by IRA information operatives more than African-Americans.  By far, race and related issues were the preferred target of the information warfare campaign designed to divide the country in 2016.  Evidence of the IRA’s overwhelming operational emphasis on race is evident in the IRA’s Facebook advertisement content (over 66 percent contained a term related to race ) and targeting (locational targeting was principally aimed at “African-Americans in key metropolitan areas with well-established black communities and flashpoints in the Black Lives Matter movement”), as well as its Facebook pages (one of the IRA’s top-performing pages, “Blacktivist,” generated 11.2 million engagements with Facebook users), its Instagram content (five of the top 10 Instagram accounts were focused on African-American issues and audiences), its Twitter content (heavily focused on hot-button issues with racial undertones such as the NFL kneeling protests), and its YouTube (page 38 – 39)

I include recommendations listed on page 78 of the report:

This challenge requires an integrated approach that brings together the public and private sectors. This approach must be rooted in protecting democratic values, including freedom of speech and the right to privacy.  The Federal government, civil society, and the private sector, including social media and technology companies, each have an important role to play in deterring and defending against foreign influence operations that target the United States.

In closing it is my opinion that after being made aware and recognizing the strategies of Russian Active Measures and in order to adopt a comprehensive approach to resolve the problem, our best recourse is to turn the executive and Congressional branches blue.  It is the only way, in my eyes, to enact legislation such as HR 1 and the numerous crucial election security bills that sit dormant on Mitch McConnell’s graveyard of stalled legislation.

We are in for the fight of our lives.  Now, let’s get to work. 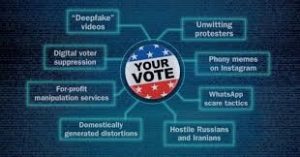 CALL-TO-ACTION: Join us and protect voters’ rights in 2020ESST
Information you should know: Who are the election system vendors behind your vote?ESST