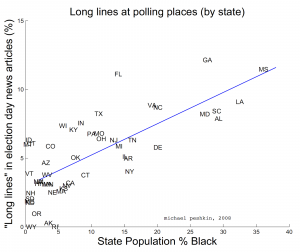 Oh, so who did you suppose was standing in those long polling place lines? I made this graph on November 5, 2008, based on how many local and regional newspaper articles commented on the long lines. Don’t blame it on a big Obama bump in 2008, that’s a myth  (small bump). And sure, I’d rather have had actual wait-time data for each polling place, to correlate with local census demographics, but that data is not collected.

There’s an optical illusion at play here. You seldom see anyone leave a line, and I’ve had campaign organizers who ought to know better tell me that a line is more of an inconvenience than an actual factor in outcomes. There is solid research on that, however. Polling place lines typically deter about 4% of would-be voters from getting in the line. If lines occur selectively by race or political geography, lines can be effective for partisan advantage.

From an Election Security perspective, what should we expect in 2020? Let’s compare two kinds of foreign interference: hacking of actual vote counts, vs. hacking of registration systems and election infrastructure to create chaos and lines. If you hack votes, you may get away with it and affect an outcome, or you may be detected (you may even want to be detected) and create societal havoc. The loser will claim a stolen election and the winner will claim fake news. The courts might or might not order a new election.

If you hack voting infrastructure and create lines selectively in the areas where one candidate’s strength is, you can also affect the outcome (4% is a big effect, and it could be done much bigger than that.) You will surely be detected. But unlike a hacked tally, there is no re-do for an election that goes technically haywire. You irreversibly win the election and you create the societal discord too, which is a purpose in itself, perhaps the primary purpose.

What might help? Cybersecurity, of course. Holding elections for a month (essentially, month-long early voting and no election day). Or greater use of vote-by-mail, even entirely vote-by-mail as is done now in several states. These would avoid the “zero-day” attack scenarios I outlined. They could also reduce an age-old tradition of Black vote suppression.

Election Security advocates tend to be wary, especially of vote-by-mail. Their concerns are valid, too. Let’s ponder the alternatives.

Information you should know: Who are the election system vendors behind your vote?ESST
MAKE A PLAN TO VOTE!ESST, ILVOTE