First Saturday: Listening, Learning, and Elevating Voices from the Frontline

Join us to learn from and engage with people on the frontlines of the fight for social justice.

By Leni
In Indivisible Illinois Social Justice Alliance
Posted May 11, 2022

Open to all to Attend: School Board Members, parents and interested folks.

This is a forum for School Board members across the state to share, strategize and collaborate. All SB Members, parents and non SB members are invited to attend and learn / contribute what is happening locally / across Illinois and Nationally.

There is an organized effort to spread disinformation, we need to understand who is sponsoring the disinformation, and how to stop it. This is hand-to-hand combat as these conservative activists try to promote racist policies, unseat duly elected representatives and disrupt our local school board meetings,

Learn what we can do to level the playing field! Register Video: Building Bridges Not Walls: How the RCN Can Create Cross-Racial Solidarity and Unite All Voters 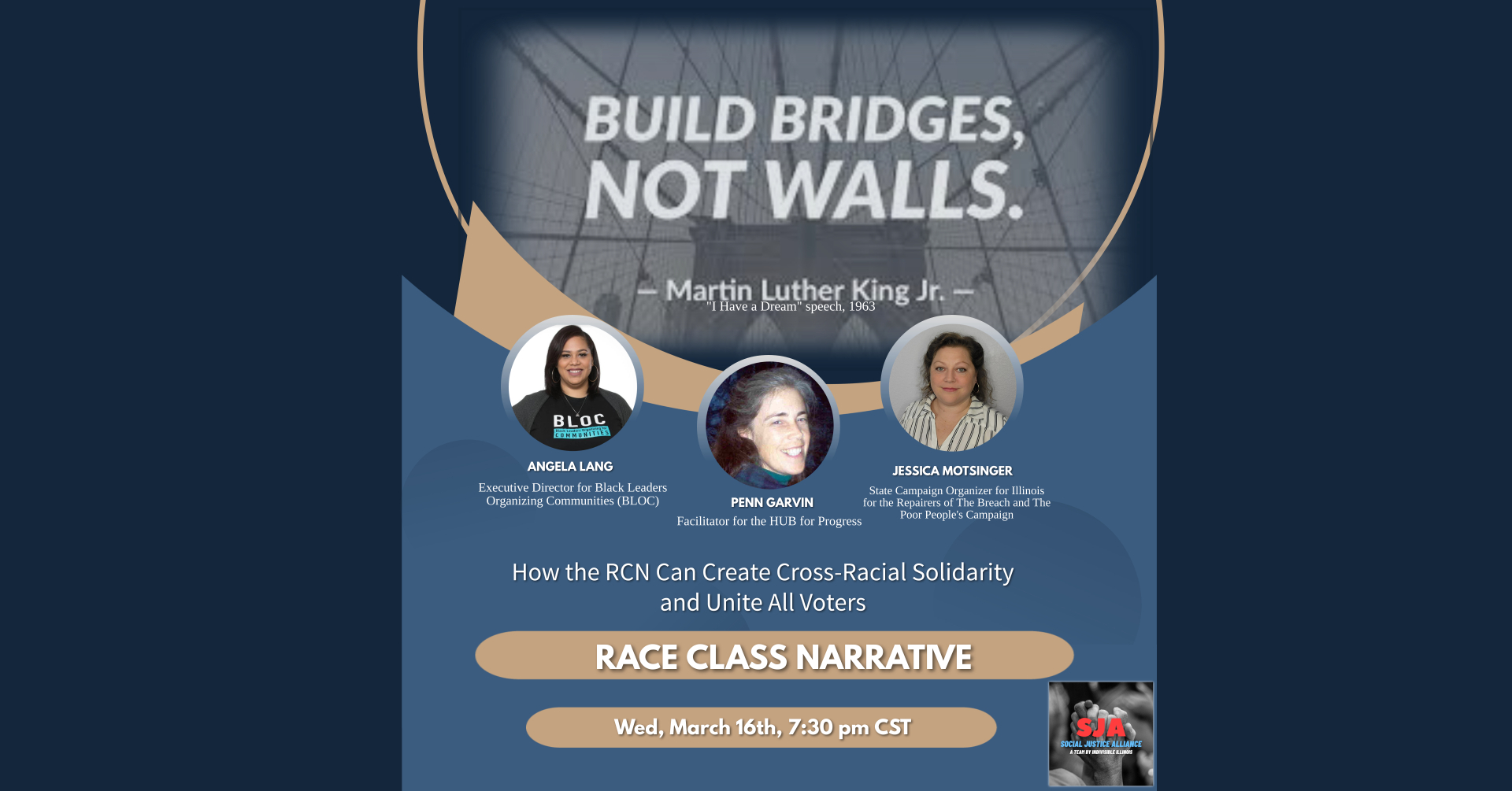 Building Bridges Not Walls: How the Race-Class Narrative Can Create Cross-Racial Solidarity and Unite All Voters

The Indivisible Illinois Social Justice Alliance will host the next Community Collaborative virtual event on Wednesday, March 16, 2022 at 7:30pm CDT. We will discuss the Race Class Narrative (RCN) and welcome guest speakers who will share their dynamic stories with you. Our guests will be representatives from the Poor People’s Campaign IL, Black Leaders Organizing Communities WI (BLOC) and the Hubb for Progress PA.

What is the Race Class Narrative? Our opposition regularly uses racial fear as a tool to exploit economic anxieties. They do this by framing their arguments in terms of one group getting more at the expense of the other group even when, in reality, the economic interests of both groups are the same. In doing this, our opposition turns each group against a government that works for all groups.

Race Class Narrative messaging fights back at these attacks by showing that both groups are fighting the same barrier to unity, namely, the politicians and corporations holding both groups back. This is what convinces the largest possible group of White people to support our economic and racial justice policy solutions.

RSVP to learn how proper messaging can fight back against these attacks and what actions we can take today to address these challenges:
https://act.indivisible.org/event/local-actions/165688 Evanston, Illinois has become the first U.S. city to pass legislation to pay Reparations to its Black residents for generations of damages and discrimination. With 62% of the country against paying Reparations and decades of unsuccessful attempts to get H.R.40 passed in Congress, many are asking “how did Evanston do it?” and most importantly “is it enough?.” Justin Marcoviche-Garnett of the Reparations Stakeholders Authority of Evanston and Kelly Bee of Indivisible IL 9 Antiracist Work Group and Indivisible REI Illinois, explores these topics along with the background of how we reached this historic moment. Join us to learn how Evanston is setting the template of what ’40 acres and a mule’ is today in the United States.

Webinar: Confronting the Rise of School Board Disruptions

Throughout the country and in Illinois, we have seen the rise of well-funded disinformation campaigns targeting school boards and educators. This event will cover: Who’s behind the disinformation campaign around masks/vaccines mandates, an erosion of LGBTQ+ rights and the way race is being taught in our schools? How can we band together to support our school boards and staff who are being threatened and to protect public education? Hear from an excellent panel and connect with others around Illinois who are organizing in their communities to stand up for inclusion, safety, and teaching a full and accurate history in our schools that protects all students.

— Jennifer Berkshire, Author A Wolf at the Schoolhouse Door

— Jennifer Berkshire, Autora “A Wolf at the Schoolhouse Door”

CONFRONTING THE RISE OF SCHOOL BOARD DISRUPTIONS

Since the spring, there have been many incidents across the country and around Illinois where school board members have been harassed and threatened about policies around covid safety, like mask and vaccine mandates, but also about other issues like support for LGBTQ students, accurate and honest teaching about race in US history, and culturally-responsive curricula and standards. In some cases the attacks are on the very existence of public schools and public ed with calls for defunding, vouchers and homeschooling.

The goal of this event is to help parents, teachers and public school supporters learn more about what’s been happening in our state and elsewhere and begin to gather the tools to confront these attacks and defend our most local democratic institutions, public schools and school boards, with grassroots organizing and facts.

RSVP here for this virtual event

Jennifer Berkshire, the author of two books, A Wolf at the Schoolhouse Door: The Dismantling of Public Education, and The Future of School and More Worlds to Negotiate: John Dunlop and the Art of Problem Solving. She also writes about the intersection of education and politics for theNation, theNew Republic, theBaffler, theNew York Times, and other publications. She is a licensed public school teacher & also teaches podcasting in the journalism program at Boston College. Jennifer co-hosts the education podcast, “Have you Heard,” with Jack Schneider.

State Senator Cristina Pacione-Zayas, PhD, was appointed to the Illinois Senate in December 2020. Before joining the Senate, she was the Associate Vice President of Policy for Erikson Institute and served as board member and secretary of the Illinois State Board of Education. Prior to that she was the director of education at the Latino Policy Forum, and previously worked at Chicago Public Schools and Enlace Chicago. In a volunteer capacity, she has served on numerous boards including the Illinois Early Learning Council, Illinois State Team of the BUILD Initiative, Kindergarten Transition Advisory Committee of the P-20 and Early Learning Councils, Logan Square Neighborhood Association, and co-chaired the non-profit advocacy group The Puerto Rican Agenda of Chicago for six years.

Nathaniel L. Rouse is the first ever Director of Equity, Race, & Cultural Diversity Initiatives at Barrington Community School District 220. From 2008-2019, he was the principal of Oak Park and River Forest High School. Now in his 26th year in education, he is dedicated to transformational leadership, service, and action to eradicate the systemic inhibitors in schools that create uneven outcomes for students based upon race and ability.

Julie Harris has been an educator for 31 years. She has an undergraduate degree in elementary education and masters degrees in special education and educational administration. She is currently a special education teacher in Tinley Park CCSD 146 and is serving her tenth year as Union President for her council. She is also the Recording Secretary for IFT Local 604.

Kylie Spahn is a parent and public-school activist who is passionate about protecting student rights, bringing equality to all public-schools, and advocating for best practice in the classroom while fighting the abuse and misuse of standardized testing. She has been fighting back against book banning attempts at her daughter’s district in Downers Grove.

Jessica Jacob is a parent of two, one at Algonquin District CUSD300 where she’s a member of the Parent Advisory Council.. She’s deeply involved in education issues in her community and has organized parents around anti-racism work, school board elections and mobilizing parents to attend board meetings to show support during these recent contentious times.  Jessical works as Director of Sales and Marketing Operations for a medical device company. Indivisible Illinois stands with the Huber and Rosenbaum families

Indivisible Illinois stands with the Huber and Rosenbaum families in demanding accountability for the sheriff, police chief and officers in Kenosha who enabled, condoned and supported Kyle Rittenhouse, the teen who fostered chaos and endangered all of us who peacefully protested for justice in Kenosha.

We know that this verdict is yet another example of a system that excuses white violence and devalues our lives based on who we are and what we look like.

When those who are sworn to protect and serve allow armed militants like Rittenhouse to get away with shooting people he disagrees with, it puts all of our voices in danger, no matter the color of our skin or how we choose to express our values.

Meanwhile, Kenosha’s Officer Shesky has still not been held accountable for brutalizing Jacob Blake. We uplift the memory of Anthony Huber, his friendship with Jacob, and what he died marching for. And we echo the demands of the Blake family that the Biden administration must pursue justice for Jacob.

Indivisible Illinois is part of the locally led, people-powered Indivisible Project network, a grassroots American movement founded in 2016, with thousands of chapters in urban, suburban and rural areas, with at least two groups in every congressional district. Indivisible Illinois engages and empowers people in the Land of Lincoln, the Home of Obama, the Heart of the Midwest, to promote a progressive agenda, elect progressive leaders and realize progressive government. Shortlink to this document: https://bit.ly/Illinois-Convening-Resouces

Thank you for joining us at the Illinois Convening on November 13, 2021 In a cocktail shaker filled with ice cubes, pour tequila, blue curaçao, and pineapple juice.  Shake and   Strain into a chilled cocktail glass over fresh ice, if you like.  Garnish with Maraschino Cherry.

Join us on Slack

Register in advance for our weekly (Monday) meetings