A Revolution of Values: How the Race/Class Narrative Can Help Build a Coalition for the Common Good 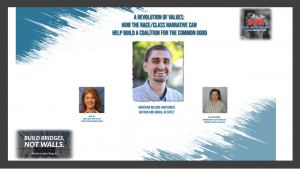 The Indivisible Illinois Social Justice Alliance continued our Build Bridges not Walls series. We are at a turning point in our democracy with Christian Nationalism taking on an oversized role. Look to the U.S. Supreme Court for an example of its effects. Christian Nationalists seek to promote the status of a Christian state which doesn’t adhere to the separation of church and state guaranteed in the 1st Amendment of our constitution. Our guest speakers addressed Christian Nationalism and how the Race Class Narrative can provide a progressive response to the tactics of divisive racism which some say Christian Nationalism is based. Addressing this movement is crucial for our future and the proper functioning of our government in the United States.

More about our featured speaker, Jonathan Wilson-Hartgrove:
“Jonathan has served as a scribe for the moral movement in America today. In Revolution of Values, he tells the truth about how the Bible was hijacked by the religious Right. But more importantly, he highlights the people who are challenging a false moral narrative and shows us how faith can revive the heart and soul of this democracy.”
— William J. Barber II, president of Repairers of the Breach, co-chair of the Poor People’s Campaign: A National Call for Moral Revival

We were also joined by Jessica Motsinger, Founder and Co-Lead of Metro East Indivisible and Co-Lead of IISJA, and Diane Ore, Core Leader, of Bend the Arc: Jewish Action Champaign-Urbana who shared their stories and experiences of addressing Christian Nationalism in their own communities.