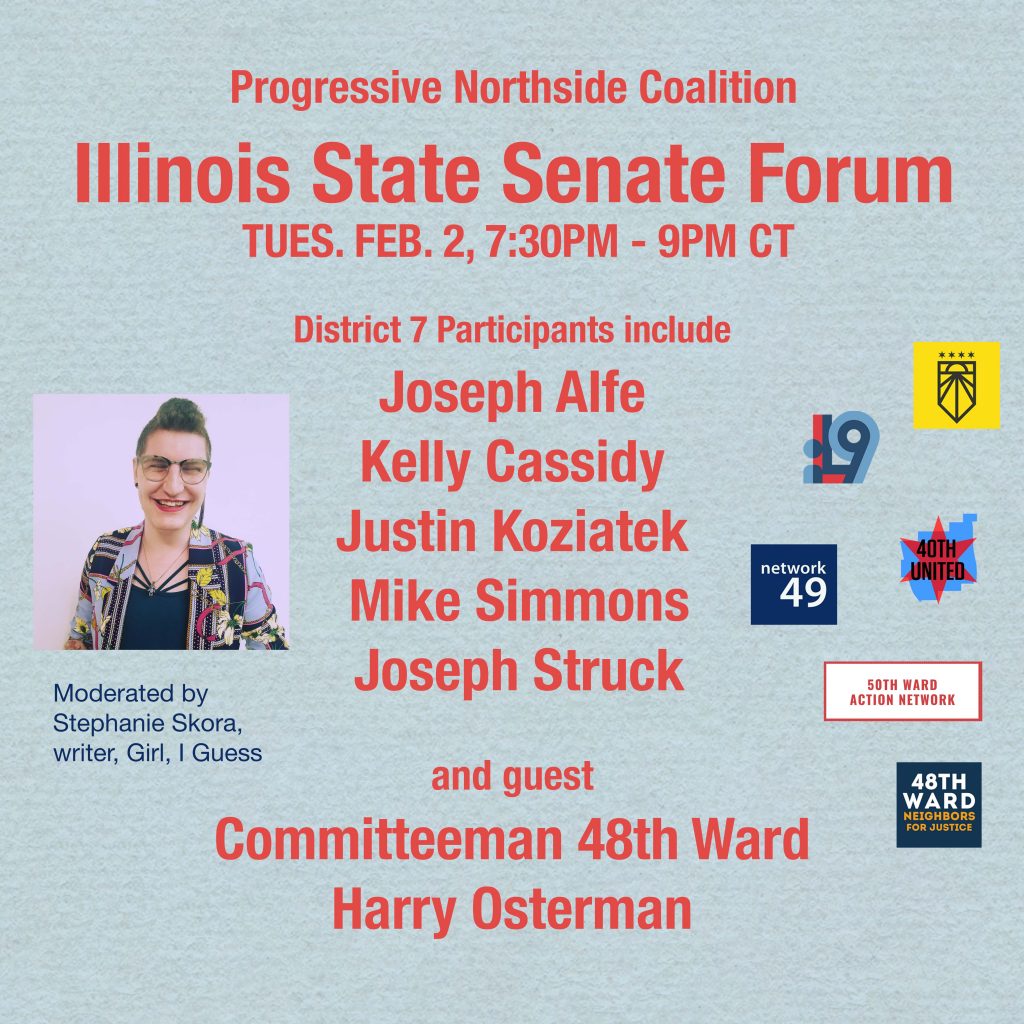 Sunrise Movement Chicago is a movement of young people working to stop climate change and create millions of good jobs in the process.

40th Ward United is an independent political organization in the 40th Ward, committed to pushing progressive politics and policies, and caring for neighbors through mutual aid

48th Ward Neighbors for Justice is an independent political organization (IPO) of neighbors in Andersonville, Edgewater and Uptown dedicated to supporting leftist causes and the multiracial working class of Chicago.

Network 49 is a progressive, community-led, political organization committed to organizing and advocating for policies and elected leadership that advance a high quality of community life, benefiting all residents in the 49th Ward of the City of Chicago.

50th Ward Action Network is a collective of politically engaged neighbors from West Ridge/West Rogers Park/50th Ward working together on issues that impact our community.

Anti-Racist Andersonville is a coalition of residents, businesses, and anyone engage with the Andersonville community. We take strategic action against the racism BIPOC (Black, indigenous, people of color) members of the community face.

Indivisible IL9 Andersonville-Edgewater is a diverse group of concerned residents and allies of the Illinois 9th Congressional District, working strategically to ensure justice for all. Indivisible IL9 is a part of a national network that aligns with the movement following the Indivisible Guide. We believe that a successful democracy depends on an informed and engaged constituency. We value Diversity; Equity and Inclusion; Respect and Non-violence.

Indivisible Illinois is part of the locally-led, people-powered Indivisible Project network, a grassroots American movement founded in 2016, with thousands of chapters in urban, suburban and rural areas, with at least two groups in every congressional district. Indivisible Illinois engages and empowers people in the Land of Lincoln, the Home of Obama, the Heart of the Midwest, to promote a progressive agenda, elect progressive leaders and realize progressive government.

Indivisible ILVOTE is certified in the City of Chicago and Cook County as a bona fide State Civic Organization for voter registration purposes. In addition, ILVOTE works to increase voter awareness and promote voter turnout for every election at the federal, state and local levels. We achieve our goals by working in coalition with other grassroots partners to host forums, deputy voter registrar trainings and voter registration drives that are open to all. We encourage individuals to take initiative and do voter registration and awareness whenever possible in their daily lives. We believe that an engaged and informed electorate leads to a successful democracy.