We at Indivisible IL9 were proud to be among the first to endorse you and pleased to work hard for your campaign. To us you represented transformative change in a city that had been saddled with the entrenched corruption of machine politics. Now, less than two years later, we’re dismayed to see behavior from you that reminds us all too well of what we fought to end.

Last week we watched in horror as video revealed Chicago police bursting into the home of an innocent woman who stood naked and vulnerable. The faces of those officers remained uncaring and callous to her cries. That happened before you took office, and you can’t be held responsible. Yet it was your office that sought to hide that video from us–your administration who tried to use the legal system to keep the truth from the hands of reporters and the eyes of voters.

Yes, you did apologize. Just as Rahm Emanuel apologized after the courts forced him to reveal what really happened to Laquan McDonald. How could we miss the similarity? How could we escape the sinking feeling of déjà vu? How could we not feel the keen disappointment that despite your promises, there is still no police civilian oversight ordinance and no real change at all?

Because this week’s video release isn’t the first time we’ve been reminded of the power plays of the bad old days.

This latest (known) injustice with the invasion and assault over Anjanette Young has revved the engine of mobilization once again. We are reminded triple fold that we need substantial systemic change that prioritizes community over police, with ordinances including CPAC and Peace Book, and for CPD to adopt the recommendations of the Use of Force Working group . 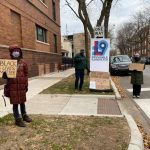