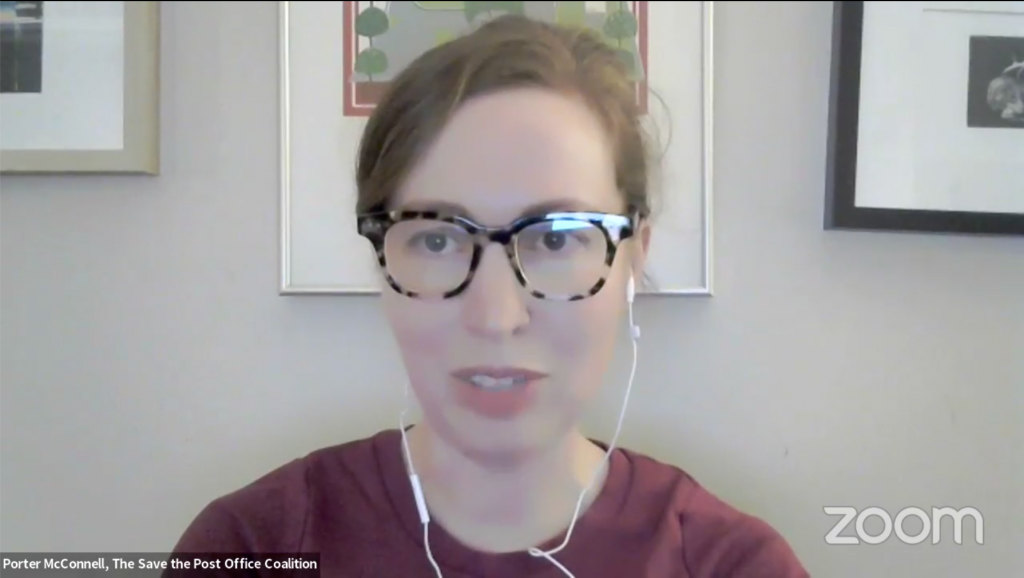 Watch the Facebook Livestream here.
At the Vote By Mail (VBM) Taskforce meetings, we cover grassroots efforts to make a difference in federal, state and local voting rights. We focus on vote-by-mail because studies show its effectiveness for boosting aggregate turnout and reducing voting disparities across subgroups. An analysis of 2020 voting patterns shows that the biggest gains were for low–propensity voters such as young people, blue-collar workers and voters of color. The takeaway is that vote-by-mail can reduce turnout inequalities. We recognize that vote-by-mail requires an effective and well-functioning postal service. Challenges of the USPS have been widely covered especially since the appointment of Louis DeJoy as postmaster general.
Our guest speaker Porter McConnell has been a tireless advocate for postal service reform and the removal of DeJoy. Her Save the Post Office Coalition came together last summer after Postmaster DeJoy was appointed and began cutting service and intentionally slowing down the mail. The coalition’s membership includes over 300 organizations that range from national groups like Public Citizen, ACLU, NAACP, Indivisible, MoveOn, Color of Change, the American Postal Workers Union, National Farmers Union, VoteVets and RuralOrganizing.org.
U.S. Representative Michael Quigley (IL-05), Chairman of the Appropriations Subcommittee on Financial Services and General Government, has been a strong advocate for postal service reform. Congressman Quigley has raised concerns about the significant mail delays currently experienced by his constituents in many areas of Chicago and has pressed DeJoy for solutions to those ongoing issues. During an Oversight Subcommittee hearing, he questioned DeJoy on the series of sweeping organizational changes he made early on that led to a severe degradation in delivery times that took months to resolve.
It is by working together in coalition and community that we will make a difference.
coalition, post office, USPS, Vote by Mail, voting