Lori Ashikawa: Hi, everyone! I am going to tell you a little bit about myself and then a little bit of how I got involved with Indivisible IL9, but also with activism in general.

I’m from California and I’m a third-generation Japanese-American. My grandparents immigrated to the United States around the turn of the last century. They settled in the Bay Area of Northern California and started a business raising flowers. There was a small Japanese community there. My mother and her three brothers were all born in the same Oakland hospital that Kamala Harris was born in. (Actually, we were all born there!)

They were doing really well with their nursery business, and then World War II came about. My grandparents, my mom, and her siblings were all taken to concentration camps around the country, mostly in the interior. My mom and her family ended up in Utah, at Topaz concentration camp. They were there for three years. They started out living in horse stalls when they were first given notice that they had to evacuate the Bay Area. Basically what (the government) did was go to racetracks all over the country and whitewashed over the stalls; my mom said she remembers having to sleep with the smell of manure because you know they hadn’t really cleaned out those stalls.

So I was raised kind of knowing about that but not really, because the Japanese American community felt shame from that. Even after the war, they went back and tried to rebuild their lives again, but they didn’t really talk about what had happened to them, even with their kids. I had to learn about it from school, and a little bit from just hearing rumors. So I really thought that my parents had been in jail! I didn’t understand what had happened until much, much later. It really wasn’t until the reparations were signed and the US publicly acknowledged what had happened to the Japanese-Americans before my parents started talking about it. You can draw a direct parallel between what happened with other groups, notably with Black Americans and indigenous people in our country, and why reparations are so important to people.

When I was in junior high school, one of my favorite books was “The Autobiography of Malcolm X.” Another book I read was about the Irish Republican Army and Bernadette Devlin McAliskey (“The Price of My Soul”). Those were my two heroes. I hung out with a bunch of kids who were pretty involved in what was going on. That was the mid-70s; I did a little bit of canvassing for George McGovern. We were really involved in school politics, because there was a lot going on with standardized testing, which we thought was really unfair and very biased against certain groups of people. We boycotted our standardized tests, and were threatened with suspension, on and on.

After college I got into my career as a classical violinist. I went to college and fell away from being (politically) engaged. You know, I do a lot of soul-searching now because I feel like I spent 30 years basically not doing anything except writing checks to organizations that I believed in. I always voted, and occasionally I would get involved, like when 9/11 happened, I felt that Muslims were being targeted… you know that really rang a bell for me. When I moved to Chicago, I noticed immediately that Chicago was one of the most segregated places I’ve ever been in. Not to say that this didn’t already exist in Los Angeles, but it always really bothered me. Living in Andersonville, if I crossed over Broadway to go to the grocery store, I felt like it was not only segregated racially but that there was such a huge economic divide. That bothered me for years, but I didn’t really do anything about it.

After Trump got elected, of course I did the Women’s March. But I remember friends saying to me, “Oh, you know, marching is the fun part.” It’s not until you do things like phone banking and canvassing and all the things that I was really scared to do… what Obama called the unglamorous stuff… that is when you start to affect real change. I always thought, “Okay, someday I’ll do that.” Finally it came to the midterms, and I knew that I had to do something. I looked around on the Internet and I saw through Swing Left that there was a group in my neighborhood, and that’s how I found Indivisible IL9. Since I could walk to the meetings over on Broadway, I thought I really had no excuse not to get involved. I started doing the easy stuff, the postcarding, which I wasn’t too scared of. But then I felt I had to do what was most impactful in a minimum amount of time, which was canvassing. So I started canvassing for Lauren Underwood, and that led to getting more and more involved.

Concurrently, I thought that not only was this political electoral stuff important, but the issues of racism and segregation and the economic differences… that was something that really bothered me. Marge Brownstein gave me a card for the Institute for Nonviolence, and she said, “You should look into this organization.” I stuck it in my purse and I didn’t really think about it. Then at some point I heard from Sarah Knizhnik (of the Illinois Gun Violence Prevention Coalition) that the Institute for Nonviolence does nonviolence trainings, and that they had a 15-hour training, five hours a day for three days, at their offices in Austin. I thought, “Well, I don’t know anything about this group, I don’t really know anything about Austin, but I’ll just go there and try this out.”

So I went, and I have to say, that was really a turning point for me. Even though I had said all along that you have to go into the different neighborhoods around Chicago to really understand different communities, as long as I was stuck in the area where I work and live, I’m never going to really understand other neighborhoods in the city. By going to Austin and doing this non-violence training, I was dipping a toe into getting a very personal understanding of people who don’t have the same background as I do. The way those non-violent trainings work is that we would be in a group of maybe 10-12 people from all over the city. There was me from the Northside, there were a few people who had been incarcerated, there was a psychologist, there was a high school student, there was Adlai Stevenson II’s wife Nancy Stevenson… it was a real mix of people. I was amazed that after three days I could feel so close to some of these people who I had just met. I felt a real connection there.

That was a springboard to wanting to get more involved in understanding what had gone on in Chicago to lead to this kind of division. That also got me interested in the whole history of the Chicago Police Department and all the horrible things that had been going on, which I knew about because I read the newspaper through the years. But if you’re not really involved, there’s a divide. You can’t really process it, I don’t know if it’s self-protection or what. I feel that to go into a community and to make friendships with people who aren’t like you is the fastest way to really get a direct connection, and to know what you need to do as an activist. Everything else to me is just superficial.

Then we got this summer before the big election in November, and of course there was so much electoral stuff to do. There was all the phone banking, there was voter protection in Wisconsin, and all the purging of people in the African American communities. I went to IL9’s Hot Topics event with Angela Lang (the executive director of BLOC in Milwaukee), and that’s how I met Deborah Harris with Action Now. I got her email in the chat and I connected her with Chris Patterson and the Institute for Nonviolence. I think that’s the best way; we make these connections and then we fill in the spaces and just run with it.

“Democracy in Action” is an inclusive space devoted to open conversation and inspiration from new and current members of our community. We also look at how We the People can better participate in and strengthen our Democracy by our work as organizers and activists.

RSVP for the next Zoom meeting here.

First time callers join a friendly pre-call orientation with current members at 7:15pm so we can ensure you have a smooth onboarding to our video chat platform and to our current conversations.

We believe that an engaged and informed electorate leads to a more inclusive democracy. On Tuesdays we come together in conversation about our values as progressives, bringing newcomers into that conversation. Listening to each other with an open heart and mind so that together we can push for progressive issues at the city, state, and federal levels and elect community leaders to pass legislative policies that support our values.
—————————————-
Indivisible IL9 Organizing Statement
“We are Chicagoland residents and allies who are pursuing a more diverse, equitable, and inclusive society by organizing in support for (or against) policies and candidates to achieve economic and social justice.” 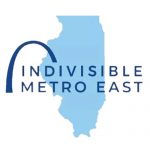