There is still so much going on in this world, post-election. We are all thrilled at the election results, but also nervous about what is happening in the White House and we are terrified about the increasing spread of COVID-19. Plus, we know that racism is a clear and present danger. I recently saw this tweet that said: “I googled ‘why does Georgia have so many damn runoffs’ and the answer, as it is with many things in America, is because of racism.” (link in tweet: Why Georgia has runoff elections). This is why we meet every week: we know that systemic racism is pervasive and discussing the influence of white supremacy on our culture is one way to combat it.

“The most disrespected person in America is the Black woman. The most unprotected person in America is the Black woman. The most neglected person in America is the Black woman.” — Malcolm X, 1962
Misogynoir is a term coined by Moya Bailey in 2008 that describes a specific kind of racism towards Black women (from the words “misogyny” and the French word for black, “noir”). This is where racism and sexism meet. Kendi addressed this in Chapter 14: Gender of How to be An Antiracist. And now we see it on the rise as our future Vice President is a Black woman and all eyes are on GA and the work of Stacey Abrams. Here in IL, Lauren Underwood has won her election and yet her contender, a white man, declared his victory last week and went to Washington DC for freshman orientation anyway.
Here are a couple of articles to review before we meet tomorrow morning (but if you don’t have time to look at these, don’t let that stop you from joining us):

If you are interested in reading a very good book that addresses this topic further, I recommend Hood Feminism by Mikki Kendal.  Here’s a review of the book. The first sentence from that review: “If you’re someone who claims the mantel of feminism, who believes in the innate equality of all genders, who thinks that solidarity among communities of women is a core component of the world you want to live in, I strongly encourage you to read Mikki Kendall’s debut essay collection, Hood Feminism: Notes from the Women That a Movement Forgot.”
And while you’re here… have you read Lead from the Outside by Stacey Abrams, herself? From the book blurb: “Lead from the Outside is the handbook for outsiders, written with an eye toward the challenges that hinder women, people of color, the working class, members of the LGBTQ community, and millennials ready to make change. Stacey uses her hard-won insights to break down how ambition, fear, money, and failure function in leadership, and she includes practical exercises to help you realize your own ambition and hone your skills.”

Antiracist action to take this week

Local School Council (LSC) elections are happening this week in Chicago. Chicagoans, take time to research the candidates in your community area and determine their stance on antiracist policies. Then head to the polls (Weds, Nov 18 for elementary schools and Thurs, Nov 19 for high schools) to vote on those candidates who are committed to antiracist change. This week at our Thursday Roundtable meeting, we heard from several candidates running on an antiracist platform at Jones Prep in the South Loop. Read those notes here.
View our ongoing notes with resources and dial in information here: https://bit.ly/AWG-notes
Antiracist Work Group Meeting facilitated by Cynthia W and Kelly B 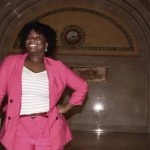