Select your jurisdiction below for specific instructions.

Progress Explanation (these benchmarks will change as we get closer to election day):
😎 More than 18% of registered voters have already voted or more than 25% have requested mail-in ballots 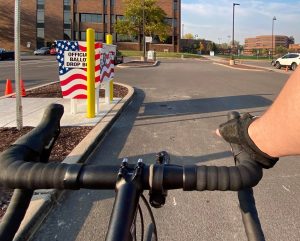 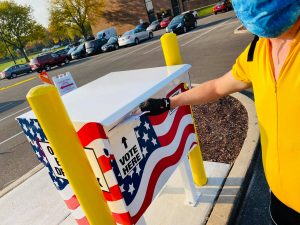 Am I eligible to vote by mail?

All registered Illinois voters are eligible to vote by mail. Double check your voter registration online with the State Board of Elections.

Will a ballot automatically be mailed to me?

No. You need to apply to vote by mail. You can apply for a ballot directly from your election authority:

Can I apply online?

Is an absentee ballot different from vote by mail?

No, absentee and mail-in ballots are the same in Illinois. Only active duty military and their families need to fill out a separate ballot application.

Do I have to show up in person somewhere before I’m allowed to vote by mail?

Will I receive my ballot in time?

Apply for your ballot now to make sure it has enough time to arrive in the mail.

For voters who return their applications early, ballots will be mailed out starting on September 24, 2020, and the voter should receive them no later than October 5, 2020.

For applications received after voting by mail has started on September 24, 2020, the ballots will typically be mailed within two business days after the clerk’s office receives the application.

How early am I allowed to send my completed ballot back?

You may mail your completed ballot back any time after you have filled it out and signed it. Return your ballot as early as possible. If you are going to send your ballot via USPS, do it before October 20, to ensure plenty of time for delivery and processing.

Do I have to pay the postage to return my ballot?

Many jurisdictions provide secure designated drop boxes or allow ballots to be returned in person to the election office. If you return your ballot this way, no postage is required.

Some jurisdictions also provide for prepaid postage or direct USPS to return them regardless of postage. Please confirm this with your local election authority.

Adding additional postage will have no impact on delivery.

Can somebody else return my completed ballot to a dropbox or election authority on my behalf?

A voter may authorize any person to return their ballot to the election authority, as long as the voter has signed the affidavit on the ballot envelope affirming that authorization was given to deliver the ballot.

Do I receive a confirmation after election officials get my ballot? How do I know it went where it needed to go?

Some jurisdictions offer website tracking or send email confirmations when ballots are returned. Check with your election authority.

Check if your election authority has a dropbox, which allows you to hand deliver your ballot and receive confirmation immediately.

If I request a mail-in ballot, can I still vote in person on Election Day?

If you change your mind and want to vote in person, bring your incomplete ballot to your polling place and give it to the Election Judge. You can then vote on a regular ballot.

If you lost your mail ballot or never received it, contact your election authority to report it right away. If necessary, cast a provisional ballot at your regular polling location on election day.

Is our mail system secure? Will USPS be able to handle all of the mail in ballots?

To accommodate mailing times, make a plan, request your ballot early, and return your ballot at least 2 weeks before the election.

Check if your election authority has a dropbox, which is a secure place to return your ballot without putting it in the mail.

Is my vote really being counted if I vote by mail?

Absentee ballots cannot legally be counted until after 7pm on Election Day. However, highly populated jurisdictions like Chicago and Cook County have counting machines and should be able to count all processed ballots relatively quickly.

If you are concerned about your ballot being counted, return your ballot 2 weeks before Election Day.

How are votes counted and tabulated?

There are some small jurisdictions without scanning machines that do not use the process described below, but for the rest data is ultimately collected and stored on a memory chip in a scanner regardless of the specific voting method. As such, the voting method is far less important than making sure the ballot is filled out correctly and submitted in a timely fashion.

Most election day voters will cast their votes on a paper ballot, which is then fed into a scanner, or will input their data directly into touch-screen ballot marking devices, which create paper ballots that are immediately scanned. In highly populated areas, like Chicago and Cook County, all early voting is done via these touch-screen devices. Most mail-in ballots are also fed into a scanner after they have been received and verified. With the new equipment in Chicago and Cook County, not only is a running total accumulated, but a data record about each ballot is created, and it includes a picture of the ballot.

Mail-in Ballots: As mail-in ballots continue to be returned, they are verified by three election judges, and then scanned using a scanner at the vote counting center.  That process continues, with the mail-in ballot data accumulating on the memory chip in the scanner, until polls close on election night.

Election Day: For votes cast on election day, the scanners in each polling place output paper totals for every race once the polls have closed. These are the preliminary totals that election judges must sign off on and report back to the election office. In some jurisdictions, the election day scanners can be connected via a cellular connection to send a one-way, handshake-encrypted transmission for the sole purpose of providing preliminary results as quickly as possible on election night. There is no Internet connectivity on either end.

The net result is that the unofficial election day totals, early vote totals, and all mail-in vote totals (that have been received and processed by election day) will be tabulated and reported on election night in most parts of the state. Official vote totals, mail-in ballots received/processed after election day, and provisional ballots will be processed over the next several days as needed until the winners can be determined.

So, it really doesn’t matter whether you vote in-person on election day, early vote, or mail-in your vote. The key is to make sure your vote is returned prior to election day and thereby reduce the number of outstanding votes that may delay the final outcome determination.

No. In a recent report titled “The False Narrative of Vote-by-Mail Fraud,” the well-respected Brennan Center for Justice rebutted claims that mail voting is subject to abuse. “Despite [the] dramatic increase in mail voting over time, fraud rates remain infinitesimally small. None of the five states that hold their elections primarily by mail has had any voter fraud scandals since making that change.” The New York Times editorial board said “states that use vote-by-mail have encountered essentially zero fraud.”

The Brennan Center report suggested seven tools to guard against mail vote fraud. Illinois already utilizes several of those tools including verifying the voter’s signatures, bar-coding ballots, tracing mail ballots through email, and harsh penalties for vote fraud. Several others can and should be adopted.

Virtually all the opposition to increased mail voting comes from the right-wing Heritage Foundation and President Trump. FactCheck.org looked at Trump’s claims and found them false:

“There is no evidence to back up Trump’s blanket claim that ‘mailed ballots are corrupt.’ Voting experts say the president is exaggerating when he says mail ballots are ‘fraudulent in many cases.’”

The Heritage Foundation’s database shows 16 convictions for mail ballot fraud in Illinois over a 14-year period, an average of about one per year.

I confirmed my voter registration and applied to vote by mail. What else can I do?

Encourage your friends and family to check their registration, apply to vote by mail, and have a plan to vote early. Use the Indivisible Resources page and social media toolkit for ideas on how to spread the word.

Select your jurisdiction to explore paid jobs on election day or volunteer opportunities in your local community:

Join your local Indivisible chapter to advocate for local issues.

Sign up with the Illinois Indivisible Vote By Mail Task Force to phone bank, lobby, write letters to the editor and advocate with Indivisible IL in support of expanding access to voting during the COVID19 outbreak and educating voters about newly passed legislation.

Join ILVOTE to become deputy voter registrars through your election authority, increase voter awareness and promote voter turnout for every election at the federal, state and local levels.

Check out our Community Art Project to spread the word about Voting by Mail.